A+ Rated and Endorsed by NRA-PVF 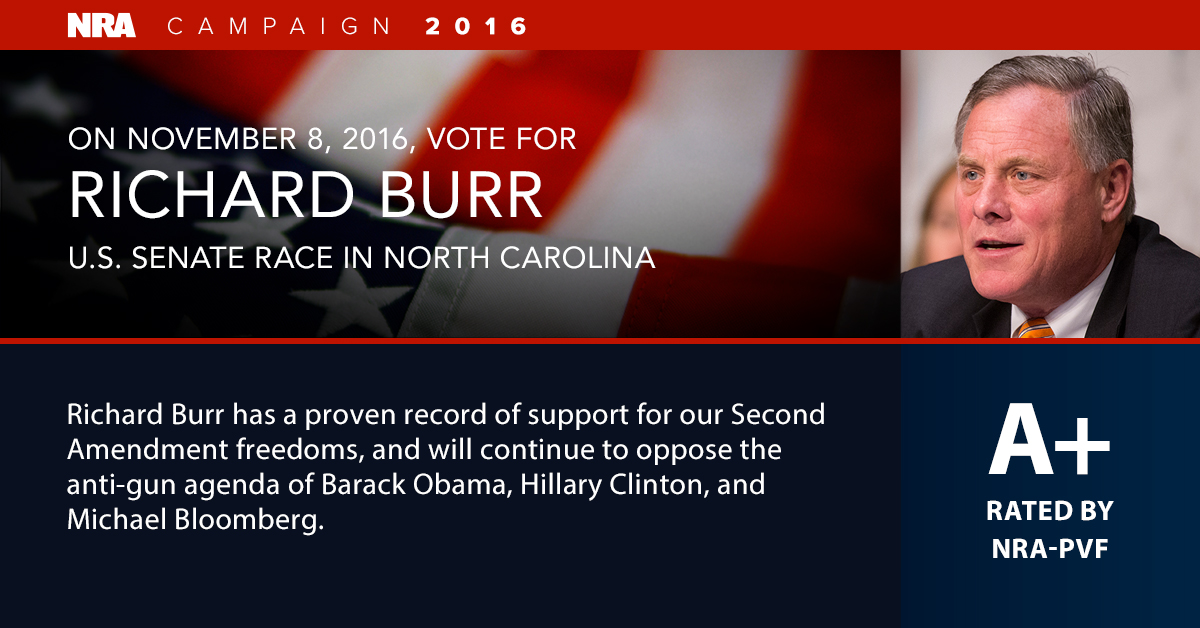 Richard Burr has a proven record of support for our Second Amendment freedoms and will continue to oppose the anti-gun agenda of Barack Obama, former NYC Mayor Michael Bloomberg and Hillary Clinton.

Richard Burr has proven support for your Second Amendment rights!

Supports Right-to-Carry
Voted for Concealed Carry Reciprocity legislation, which would ensure that law-abiding Americans with the legal right to carry concealed would be able to carry their firearm for self-defense in any other state.

Opposes Criminalizing Private Transfers
Voted against the Obama/Bloomberg so-called “universal” background check system that could criminalize the private transfer of firearms which, according to the Justice Department, is only enforceable through a federal firearms registry.

Opposes Government Blacklists
Voted against denying persons on secret government lists their Second Amendment right to purchase or own a firearm without due process.

Supports Firearm Manufacturers and Dealers
Was an original cosponsor of and voted for the Protection of Lawful Commerce in Arms Act, a law that prevents the American gun industry from being sued into bankruptcy through frivolous lawsuits.

Opposes Backdoor Gun Ban
Opposes any attempt by the Obama administration to deny millions of Social Security recipients their Second Amendment rights without due process.

Heller and McDonald Cases
Signed the pro-gun congressional “friend of the court” briefs in the Heller and McDonald cases, arguing that the Second Amendment guarantees the fundamental, individual Right to Keep and Bear Arms and that Washington, D.C.’s and Chicago’s gun bans were unconstitutional.

Opposes Magazine Ban
Voted against a ban on magazines that hold more than 10 rounds.

Opposes Anti-Gun Nominees
Voted against the nomination of Vivek Murthy to be Surgeon General of the United States due to his history of political activism in support of radical gun control measures.