"A+" Rated and Endorsed by NRA-PVF 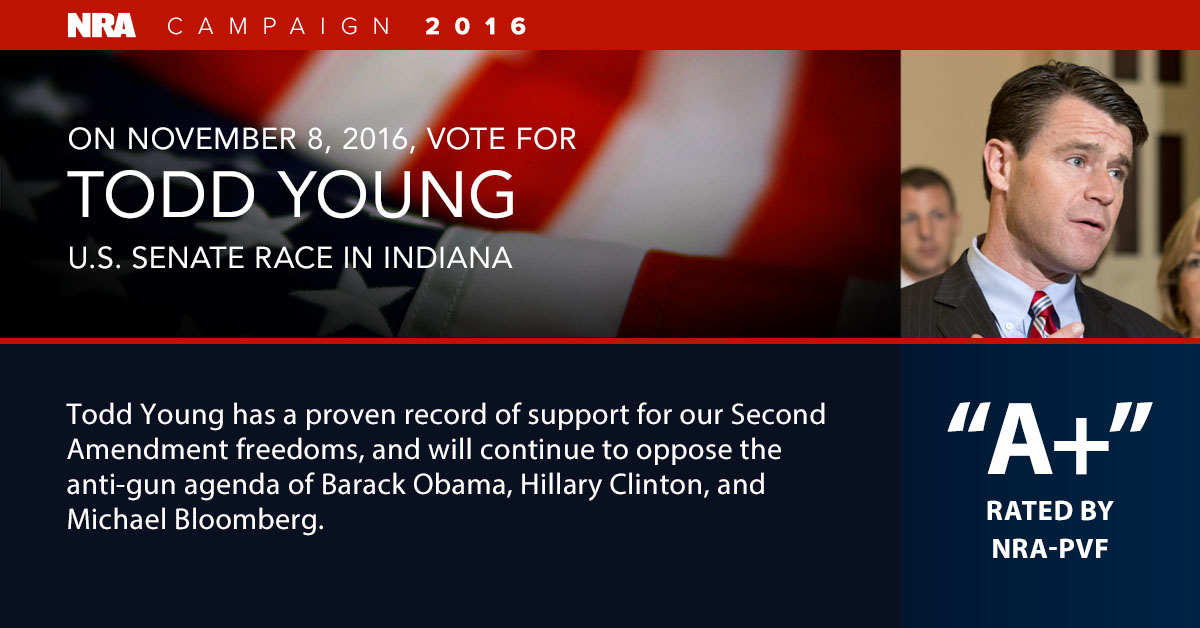 Todd Young has a proven record of support for our Second Amendment freedoms and will continue to oppose the anti-gun agenda of Barack Obama, former New York City Mayor Michael Bloomberg and Hillary Clinton.

Todd Young is the best Senate candidate to protect your Second Amendment rights!

Supports Right-to-Carry
Cosponsored and voted for Concealed Carry Reciprocity legislation, which would ensure that law-abiding Americans with valid concealed handgun permits would be able to carry a concealed handgun in any other state that does not prohibit concealed carry. Barack Obama does not trust you to carry your firearm for self-defense, but Todd Young does!

Opposes Ammo Ban
Signed a letter to the Obama Administration opposing its flagrant attempt to ban the most popular and widely used ammunition in America.

Supports America’s Hunting Heritage
Voted for the Sportsmen’s Heritage and Recreation Enhancement Act, which would open and protect access to public lands for hunting, allow citizens to carry firearms on Army Corps land, and positively impact sportsmen in Indiana and throughout the country.

Opposes Operation Choke Point
Voted for legislation that prohibits the Obama Administration from executing an abusive practice in which Department of Justice intimidates banks into refusing or severing financial services to legally operated ammunition and firearms dealers.

Opposes UN Gun Ban Treaty
Opposes any international treaty by the United Nations or other global organizations that would impose restrictions on American gun owners.

Opposes “Universal” Background Checks
Opposes the Obama-Bloomberg universal background check system that would criminalize the private transfer of firearms which, according to the Justice Department, is only enforceable through a federal gun registration.

NRA-ILA FrontLines is comprised of NRA-ILA's most dedicated volunteers, who work vigorously at the local, state, and federal levels to defend our Second Amendment rights. FrontLines members work with NRA-ILA, and especially with their NRA-ILA FrontLines Activist Leader (FAL), to advance ILA's legislative and political agendas. Your FAL is a local NRA member who has volunteered to act as the liaison between NRA members and gun owners and various pro-gun campaigns seeking volunteer support. Your EVC also works with local Second Amendment supporters to promote NRA-ILA's legislative agenda.

Held On or Before