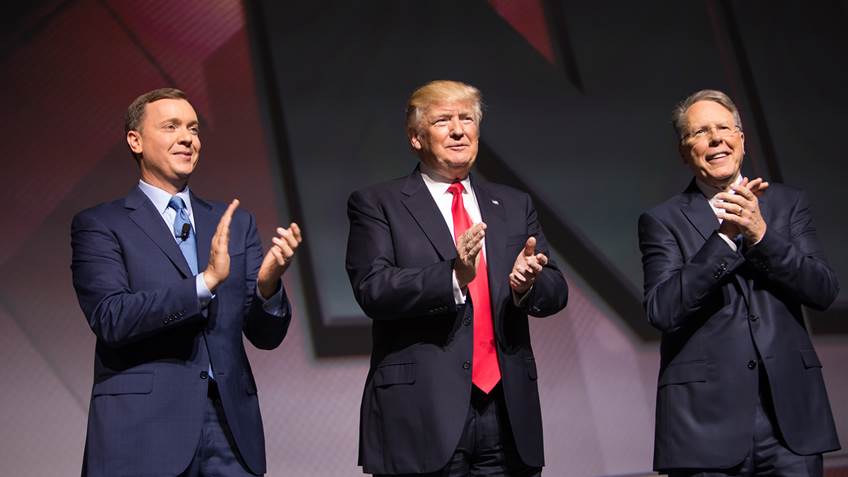 That elections have consequences was made crystal clear at this week’s NRA Annual Meeting and Exhibits in Atlanta, GA.  For the first time since President Reagan spoke at the NRA Annual Meeting in 1983, a sitting president addressed NRA members during the NRA-ILA Leadership Forum on Friday, April 28th.

Donald Trump ran the most pro-gun presidential campaign in history, and his speech on Friday made clear his commitment to our firearms freedom has not wavered in the slightest.  During his speech to the crowd of nearly 10,000, President Trump boldly proclaimed, “You came through for me and I’m going to come through for you.”

As described in a Chris Cox opinion piece in USA Today on Friday, Trump has wasted no time delivering on his campaign promise to protect and promote the Second Amendment.  He nominated Neil Gorsuch to the Supreme Court, appointed Jeff Sessions as the new Attorney General, and appointed Ryan Zinke as the new Secretary of Interior.  This is remarkable progress in a very short period of time.  Trump’s speech to the Leadership Forum on Friday made it abundantly clear that he’s not going to slow down, that protection of our firearms freedom will remain front and center in his administration.

In addition to President, the NRA-ILA Leadership Forum featured speakers from all walks of life, including elected leaders, sports figures, military and law enforcement heroes, and NRA leaders.  The theme throughout the afternoon was that while there remains a lot of work ahead of us, NRA members and supporters made all the difference in last year’s election, and future generations will benefit from our hard work.

Click the links to view President Trump’s NRA-ILA Leadership Forum speech, as well as those from Wayne LaPierre, Chris Cox, and others. For full coverage of the event please visit NRA TV.