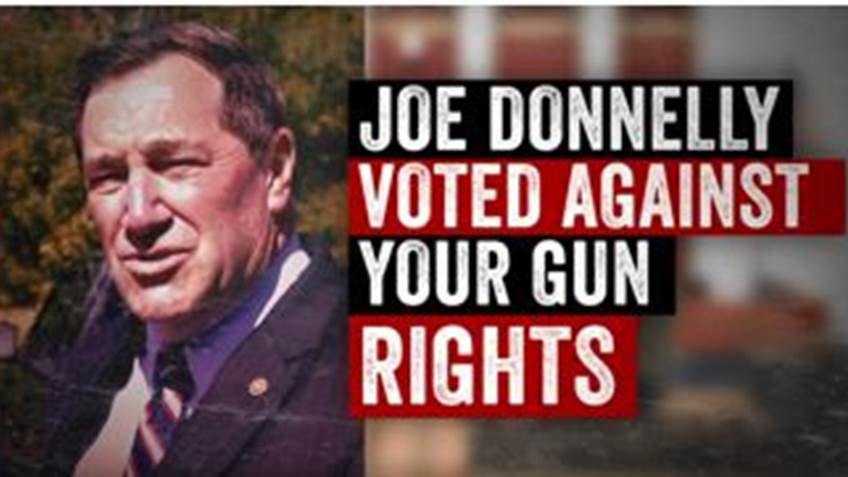 “Joe Donnelly joined forces with Chuck Schumer and anti-gun liberals to vote against our fundamental right to self-defense,” said Chris W. Cox, NRA-PVF chairman.  "Donnelly’s vote against the confirmation of Judge Brett Kavanaugh to the U.S. Supreme Court sends a clear message to Hoosiers that he can’t be trusted to protect their constitutional rights.”

"Contrary to what Joe Donnelly says in Indiana, he has supported the gun control agenda of Chuck Schumer and Nancy Pelosi by voting in favor of gun control in Washington, D.C.,” continued Cox.

Joe Donnelly is “D” rated by the NRA and supports the Schumer/Pelosi/Bloomberg gun control agenda. He voted to criminalize the private transfer of firearms between close friends and some family members, which according to the Obama Justice Department, is only enforceable through a federal firearms registry. Donnelly also supports ammunition restrictions on law-abiding citizens.

“Joe Donnelly abandoned Indiana values to curry favor with liberal anti-gun elites in Washington, D.C.," said Cox. "Mike Braun is the only candidate in this race who we can trust to protect our Second Amendment freedoms."

ANNOUNCER: Do you believe you have a right to self-defense?

The Supreme Court is divided.

And Joe Donnelly is on THEIR side.

Donnelly voted against your gun rights by voting against Brett Kavanaugh.

After 12 years in Washington, D-C Joe has gotta go.

The National Rifle Association is responsible for the content of this advertising.