"Bob Goodlatte's steadfast commitment to preserving our Second Amendment freedoms and hunting heritage has earned him the NRA-PVF endorsement," said Chris W. Cox, chairman of NRA-PVF. "We can trust Bob to continue fighting for the Second Amendment rights of all law-abiding gun owners in Virginia and across the country."

During his time in Congress, Bob Goodlatte has consistently supported gun rights for law-abiding Americans. He signed the pro-gun congressional amicus brief in the 2008 Heller case, supporting the Second Amendment as an individual right and striking down the gun ban in our nation's capital. He also signed the pro-gun congressional amicus brief in the McDonald case, supporting the position that the Second Amendment guarantees a fundamental right that protects all Americans and cosponsored and voted for the Second Amendment Enforcement Act and District of Columbia Personal Protection Act that would repeal the D.C. gun ban and restore the right of self-defense to law-abiding residents of our nation's capital.

Goodlatte cosponsored and voted for the Firearms Interstate Commerce Reform Act that would allow interstate sale of handguns subject to NICS and voted for the Protecting Gun Owners in Bankruptcy Act, which would ensure that a person who filed for bankruptcy would not lose their firearms, thereby maintaining the fundamental right to self-defense. He also cosponsored and voted for both the Protection of Lawful Commerce in Arms Act that prevents attempts to bankrupt the American gun industry through bogus lawsuits and legislation to force much-needed reform of the federal Bureau of Alcohol, Tobacco, Firearms and Explosives (BATFE). Additionally, Goodlatte voted to prohibit gun confiscation during states of emergency; to allow carry license or permit holders to carry and transport firearms for self-defense in national parks and wildlife refuges; and to protect hunting, fishing, trapping and recreational shooting on public land managed by the Bureau of Land Management.

Bob Goodlatte's unwavering commitment to preserving our Second Amendment rights and hunting heritage have earned him an "A" rating and endorsement from the NRA-PVF.

"On November 2, I urge all Virginia NRA Members and gun owners in the 6th District to vote Bob Goodlatte for Congress," Cox concluded. 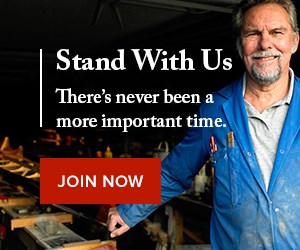